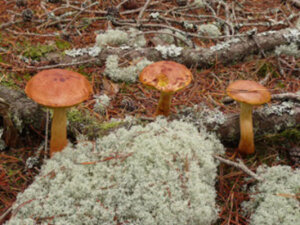 Aureoboletus projectellus is an American bolete which was first reported in Europe at the end of the 20th century. It forms mycorrhizas with native European pines. At the beginning, it was only observed on the Baltic Sea shore. Recently, the range of this fungus has been expanding significantly.

We investigate the spread of Aureoboletus projectellus in Europe with help of citizen science. Thanks to the record we already received, we performed modelling to predict direction of further dispersal. It provided us with a list of locations which require monitoring. These locations can be also a great opportunity for testing a variety of conservation techniques. Now we need your help! Please report any record of Aureoboletus projectellus in Europe using iNaturalist.

Link to project on iNaturalist:

The young specimens have quite large stem with rather small cap with cap’s skin attaching to the stem – developed specimens have convex, large and wide caps with minutely tomentose, reddish surface. Its margin is overhanging. Flesh is pinkish or whitish and not staining on exposure, but often remains pinkish when cooking or fried. The fungus has acidic taste, but not distinctive odour. Pore surface is usually bright yellow or olive and slightly depressed around stem. Slender yellowish stem is ridge-like or net-like ornamented, dry in the upper part and usually slimy at the base. Brownish spores are remarkably long and reach 23-27.5 μm x 7-9.5 μm.

Don’t forget! Every record is valuable!

If you have any further question, don’t hesitate to contact us! (emails: julia.pawlowska@biol.uw.edu.pl or martawrzosek@gmail.com)